Security Robot Argus is a professional security solution for commercial and industrial facilities.

The robot is equipped with a dual-spectral PTZ camera located on the top of the mast. This arrangement of the PTZ camera allows circular scanning of the surrounding area in the thermal and visible spectrums. Thermal video surveillance provides reliable detection of people and cars at night with little artificial lighting or its complete absence.

The camera of a visible spectrum forms a high-resolution image, it uses a new high light sensitivity sensor. The video image from both the thermal camera and the camera of the visible range is processed by the on-board computer. It provides PTZ camera control, human detection, and tracking.

A typical mode of operation of an intelligent video analysis system implies a circular rotation of the camera until a person is detected. Next, the tracking mode is turned on, and the camera tracks a person until his face is detected in the frontal position.

A photo of a person in the front position is suitable for subsequent recognition. If within 10 seconds the face image could not be obtained, the camera continues circular scanning.

Reliability and high efficiency of the surveillance system are achieved by the fact that a person is detected by the image from the thermal spectrum camera, and his image in the form suitable for recognition by the operator or by the face recognition system comes from the zoom module of the high-resolution visible spectrum camera module.

To ensure the safe operation of the robot, it is equipped with six cameras for continuous 360°-circular surveillance. The cameras have high sensitivity and work in high-resolution mode. The image from these cameras is analyzed by a separate on-board computer of a panoramic video surveillance system for detecting people. This solution allows you to detect an approaching person at a time when the scanning PTZ camera does not look in its direction.

Night security patrolling without outside lighting

Like all models of security robots manufactured by SMP Robotics. The new model, Argus, automatically moves along a pre-programmed patrol route, avoid obstacles, and returns to charge when the batteries are discharged. The security robot is charged automatically using the autonomous charging station included in the delivery package. The design of the security robot ensures its reliable movement on an uneven surface covered with rubble or small stones.

What makes it perfect for patrolling the perimeter in the territories of industrial enterprises. Video transmission from the robot, information about its location and operation of the systems is carried out via 4G or WiFi wireless communication channels. Video from CCTV cameras and alarm information is available for display in any stationary VMS supporting ONVIF protocol. The status and location of robots on patrol routes displayed in the web-based service for group monitoring of the operation of robots.

Detecting people within a 200-meter radius

Detecting cars within an 800-meter radius 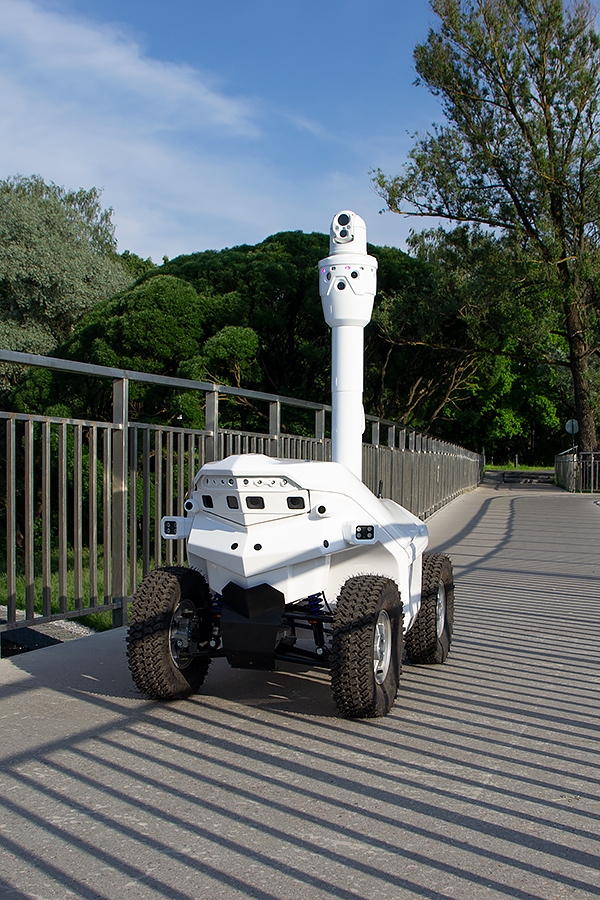 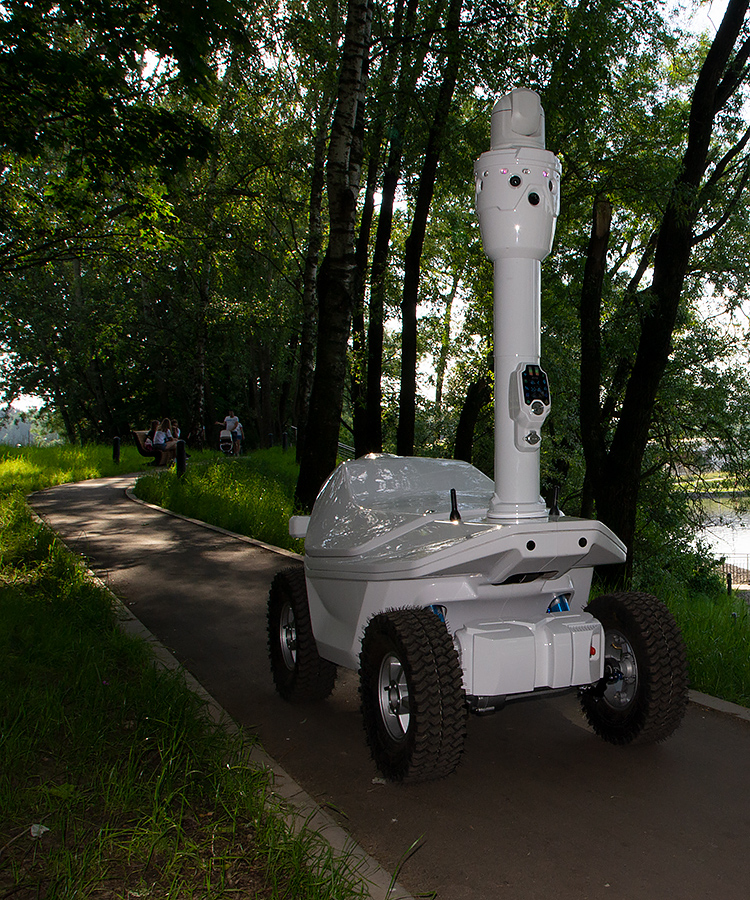 The Hershel robot is designed to detect people, cars, and other objects by using a smart thermal imaging surveillance system. The thermal imaging dual-spectrum camera that is placed on the robot is capable of working under the cover of darkness, and in conditions where there is condensate from fog and rain, with no external illumination. The combination of the robot’s mobility and long-range surveillance capability makes using Hershel ideal for addressing security related challenges in critical areas on guarded premises.

The robot is equipped with an advanced intelligence video analytics system that allows detecting and tracking objects. Using deep learning algorithms permits reliably detecting a person at distances up to 200 meters in complete darkness. The movement of the robot as part of a group is controlled by risk assessment algorithms with elements of artificial intelligence. The Hershel security robot allows substantially boosting the capabilities of a robot patrol group.

Along with the dual-spectrum PTZ camera, the robot has 6 high-resolution cameras that provide continuous 360-degree surveillance in the immediate vicinity of the robot. These cameras allow controlling the space surrounding the robot, regardless of where the PTZ camera is directed at any given moment. Panoramic cameras that work in the visible spectrum have high sensitivity, but not enough to get a high-quality image in complete darkness.

Two robot models are produced that are distinguished by the presence of an on-board system for detecting people and human faces from the images received from panoramic cameras. The S5.2 IR Hershel robot does not have that function, but is capable of working for a longer period of time without being charged. The set of equipment it has is ideal for work during nighttime on premises that do not have any artificial illumination. The S 5.2 IR IS Hershel robot is fitted out with an additional embedded computer to detect people and isolate their faces. People are recognized in close proximity to the panoramic cameras, either with artificial lighting at night or with natural light in the daytime. The detection range for a person is up to 30 meters in the daytime, and the range for obtaining a facial photo that is suitable for further recognition is up to 3 meters. Both robot models are able to detect and track objects using a thermal PTZ camera under any lighting conditions.

The Hershel robot is ideal for perimeter and fence line security. The robot is optimal for remote monitoring from positions that are inaccessible to potential intruders. This model has the option of installing a mesh fence detector to avoid colliding with a less visible obstacle.

The Hershel robot was created to patrol premises at manned and unmanned facilities. At the former, it is possible to recognize personnel by their faces, while at the latter detecting the presence of a person near the robot is categorized as an unconditional alarm situation.

Using thermal robots to guard critical facilities puts forth stringent requirements for the quality of the robot’s on-board video analytics system. To avoid false alarms, software solutions are used with the application of deep learning algorithms based on neural networks.

The thermal dual-spectrum PTZ camera scans the surrounding space by rotating in a circular manner. The video data from both PTZ camera sensors is analyzed by a supercomputer that uses an NVIDIA processor. Despite the high sensitivity and adequate resolution possessed by the passive thermal camera, analyzing images received from the camera in the visible spectrum during the daytime allows obtaining additional information that is useful to detect an object without making any errors.

When a given object is detected in the camera’s field of view (this could be people, cars, tracks, bicycles, horses, or camels), the embedded computer puts the camera in tracking mode for the object detected and transfers the image to the video management system control room. Thanks to the phenomenal processing power of the onboard computer, every frame of the video is subjected to deep-learning analysis by the dual-spectrum camera, ensuring high reliability for tracking of detected objects and reducing false alarms.

When patrolling in conditions where there is sufficient illumination, it is advisable to use intelligent robots equipped with high-resolution visible-spectrum cameras. The S5.2 IS Promt robot is designed to patrol pedestrian passageways and recognize people in the robot’s immediate vicinity. The AI S5.2 PTZ IS Picard robot was created to detect people and perform smart video surveillance at distances up to 100 meters.

Skillful use of the features inherent in each robot model allows fitting out even the most complex facilities with robotic security. The unique AI capabilities inherent in the management of patrol routes and determining the positions used for surveillance provide a very high level of security.

Thermal dual-spectrum robots, like robots of other models, are equipped with powerful built-in artificial intelligence. This makes robotic security extremely reliable. Each robot autonomously makes decisions, depending on the location of other robots and the results of big data analysis of risk assessment. The failure of one or several robots, as well as the absence of a single management server, does not lead to a fatal loss of security for the area under guard. 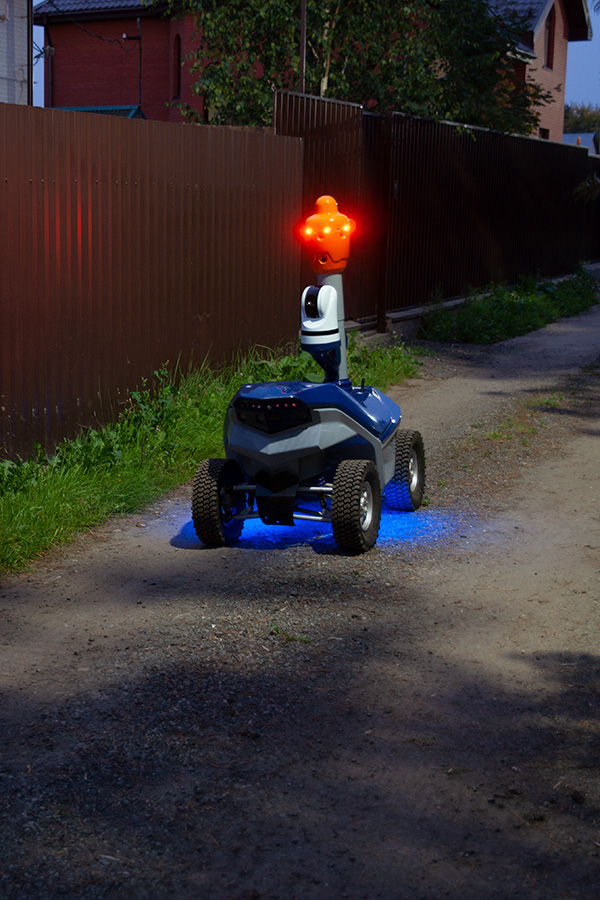 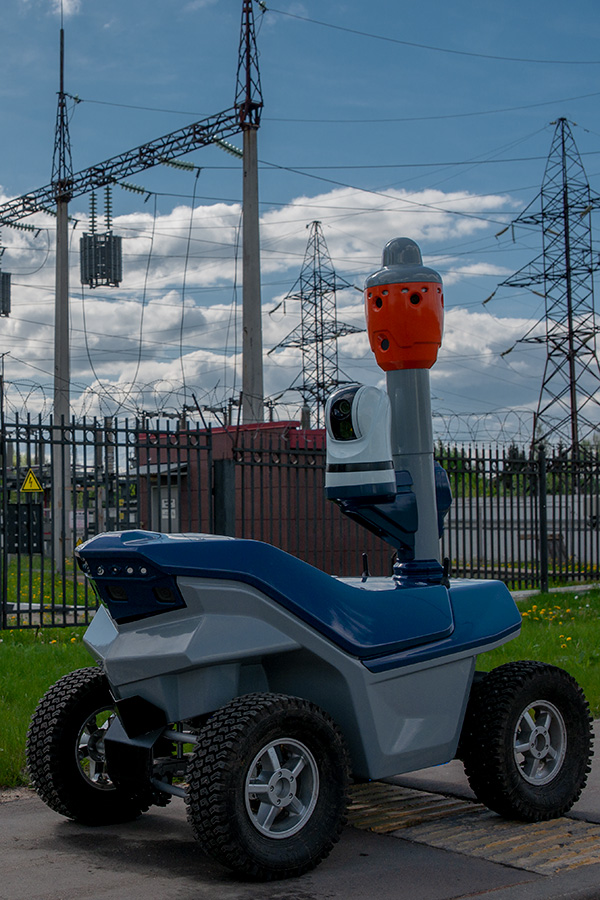 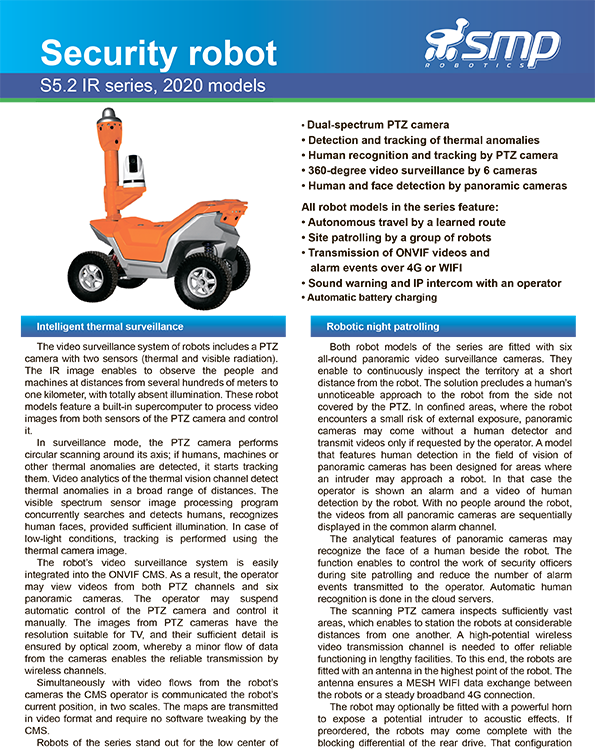