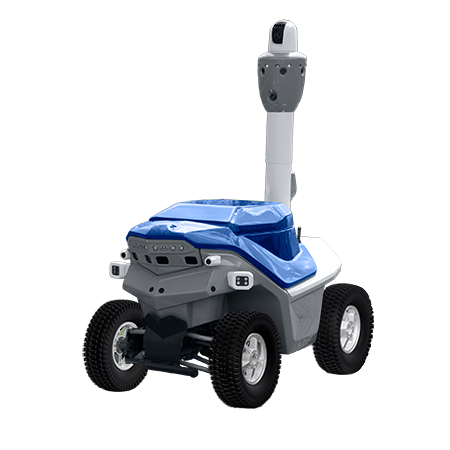 The robot is perfect for the delivery of small loads to dedicated areas on routes other than the path of car traffic. These can be the territories of factories, gated communities, or parks. The robot is not designed to move on the city’s public roads. The transport robot demonstrates the best results when driving on repetitive routes.

The robot is equipped with all-around surveillance cameras, which allows it to be used as a security robot. Video surveillance is carried out continuously throughout the entire operation time of the robot, during cargo transportation, awaiting for loading and unloading, or during charging. The robot’s batteries are charged automatically without operator intervention.

The robot’s intelligent video surveillance system can recognize people by their faces. This simplifies the process of sending the parcel to a specific person whose photo is uploaded into the robot. The transport compartment of the robot opens and closes automatically without human intervention. The cargo compartment lock ensures the safety of cargo and precludes any unauthorized extraction.

The Prompt robot is equipped with automatic movement control and an obstacle avoidance system. Movement control is carried out by integrating information from machine vision systems and GPS. This approach allows the robot to move confidently along the route in conditions of unstable GPS reception. The robot is designed for driving on solid or gravel roads. Small curbs, bumps on the road, and puddles do not impede the robot’s movement. The robot can move along narrow pedestrian paths. The movement of the robot is accompanied by a stroboscopic light placed on the mast.

The autonomous delivery robot is equipped with a safety system of maximum deviation from a predetermined route. The system allows you to restrict the movement of the robot when avoiding large obstacles that impede movement. Also to prevent the robots enter to the roads of movement of vehicles or heavy machinery.

Autonomous delivery robots Prompt is a perfect solution for automating the transportation of small parcels between the workshops of an industrial company. The uncrowded, fenced area of the enterprise without strangers is the best habitat for an autonomous mobile robot.

The robot is suitable for transporting samples of substances to a chemical laboratory for analysis. This solution will help optimize the work of personnel at chemical, oil refineries, and other plants of a continuous cycle.

Picking up and receiving the parcel by the security robot

For homeowners living in large areas, the transport robot will simplify the receipt of goods delivered by transport companies. The Prompt robot can wait for the delivery of the cargo at the gate of the site border and, after loading it by the courier of the transport company, deliver it directly to the house. This helps to avoid unauthorized visits to the homeowner’s territory and saves the owners or service personnel from waiting for delivery. Thanks to the on-board smart video surveillance system, the Prompt robot will cope well with the tasks of a security robot in a smart home.

The Prompt robot is capable of not only securely store the goods during transport and waiting for unloading, but also performing and solve tasks inherent to a security robot. Six cameras that installed on the mast of the robot, forming a circular panorama of video surveillance around the robot. The image from them is processed by an intelligent video surveillance system capable to detect and recognize people. When a stranger is detected, the robot will ask him to introduce himself or send an alarm signal.

The Prompt robot can be used to deliver courier parcels from the entrance to the protected area of the enterprise, directly to the recipient in the workshop. Autonomous delivery robots allow you to automate the receipt of a parcel. The courier can independently place the parcel in the transport compartment of the robot. After detecting it, the robot will close the compartment and take it to the addressee to the entrance of the workshop.

An employee of the company able to pick up the delivered parcel at any time convenient for him from the robot standing at the entrance. At the same time, the package will be safely stored thanks to the lockable transport compartment of the robot.

The recipient’s authorization, which is required to open the lock of the cargo compartment of the robot, is carried out using an NFC tag or a photo of the recipient’s face, recognized by the onboard security system of the robot.

This eliminates the waste of time of employees of the transport company and the person waiting for delivery.

Robot Saves Lives, Transport, and storage of a rescue equipment

The cargo compartment of the transport robot can be used to store a first-aid package or life-saving water for hot climate conditions. The intercom of the robot allows communication with the operator in case of an emergency. For territories without reliable cellular communication, the robot is equipped with a long-range shot wave radio station.

The cargo compartment of the transport robot can be used to store the package of first aid or water to save a person’s life for the hot climate conditions. The robot’s intercom allows communication with the operator in case of an emergency. For territories without reliable cellular coverage, the robot is equipped with a long-range short-wave radio station.

To increase the visibility of the robot at a large distance, a corner reflector is installed on it. This allows the robot to be detected by the glare of sunlight in the daytime. At night, the location of the robot can be easily tracked thanks to installed strobe light mounted on the robot mast. A flashing light signal in combination with an occasionally activated sound siren will allow a person in a difficult situation to find a robot and send a distress signal.

For uninhabited terrain with dirt roads and the lack of electrical network, all-road versions A- series of the robot are produced. Robots A-series have a high cross-country performance and are equipped with solar panels. Additional information on the cross-country transport robot is available upon request. 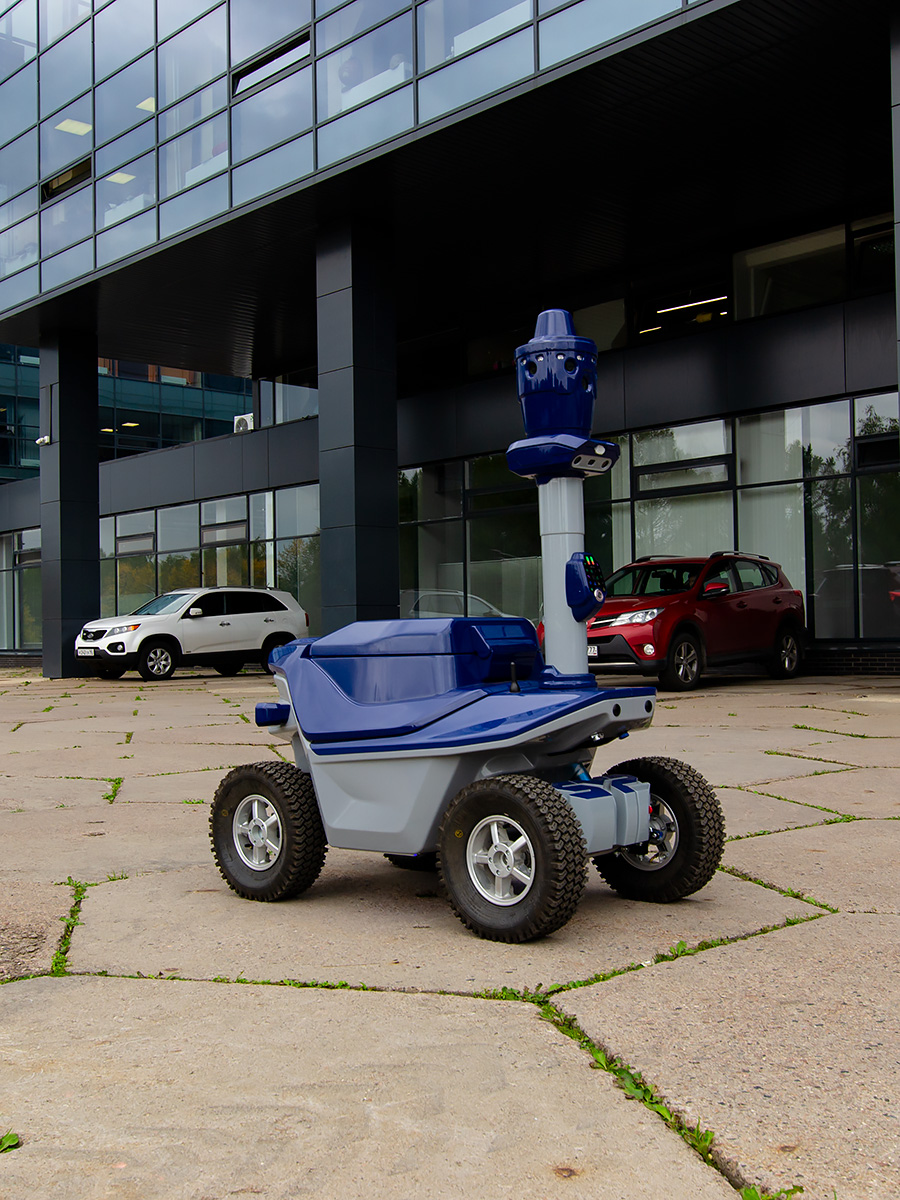 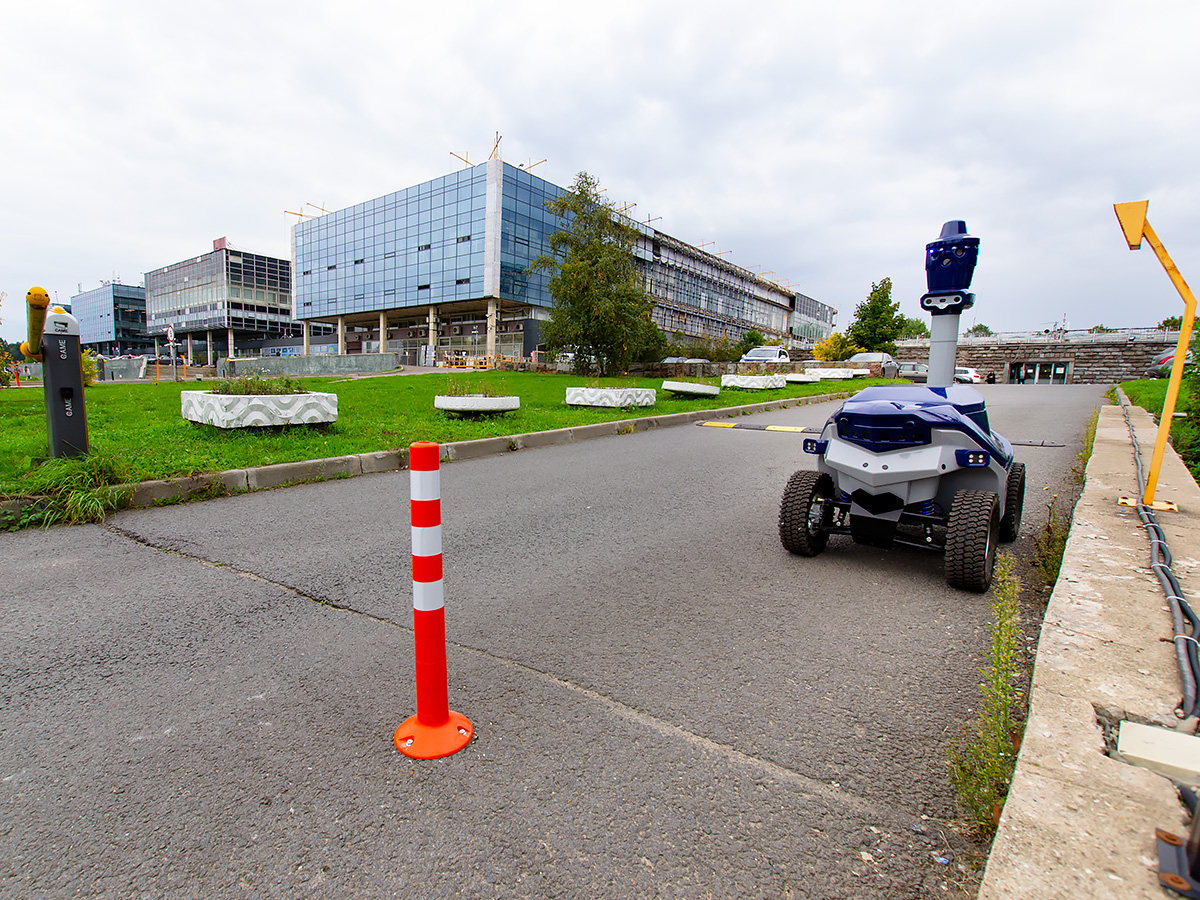 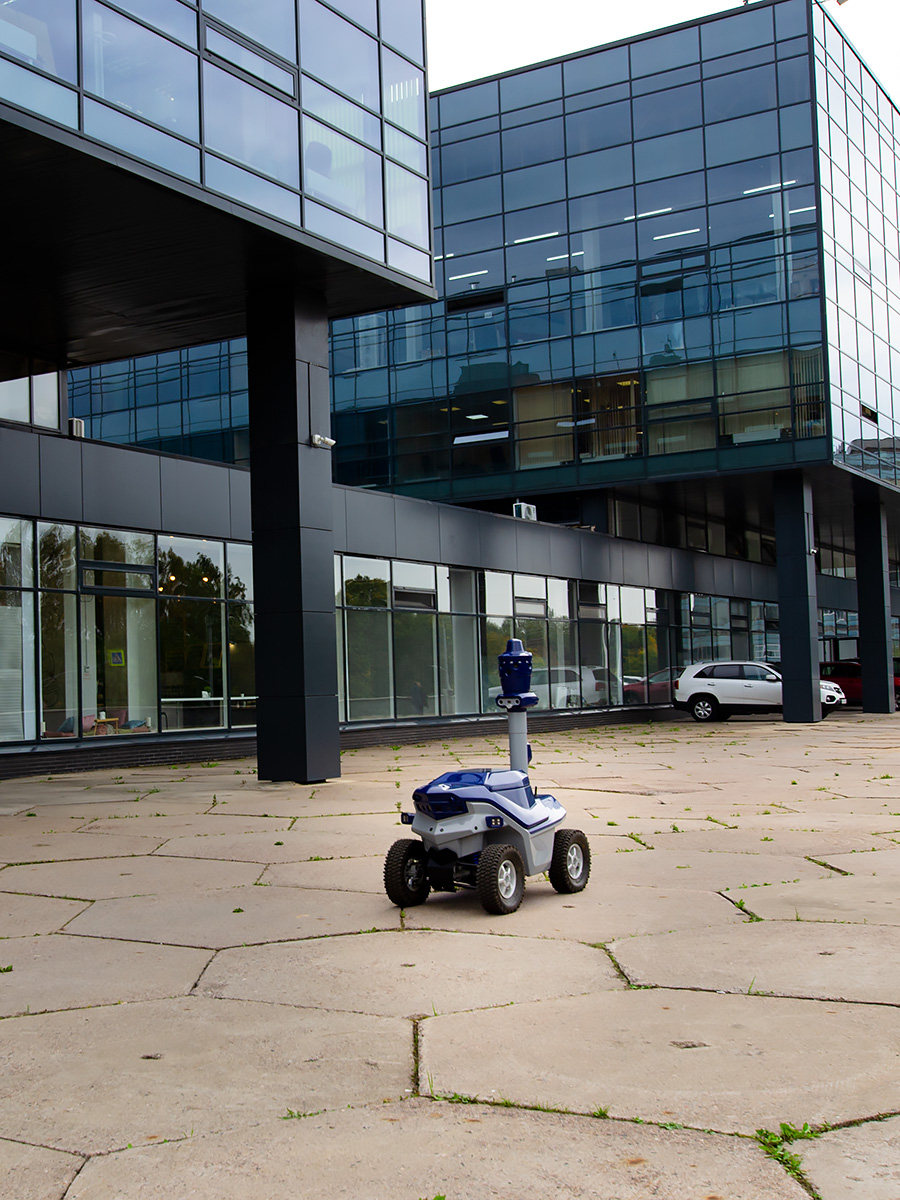 TECHNICAL SPECIFICATION OF THE DELIVERY ROBOT