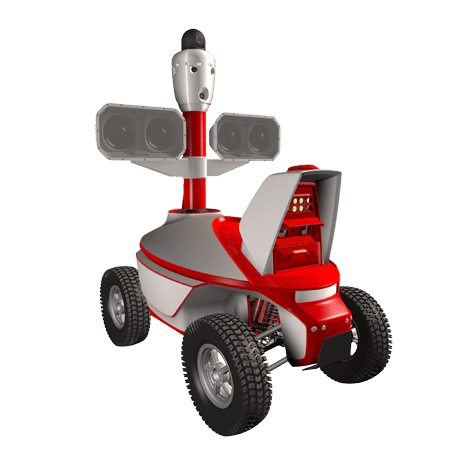 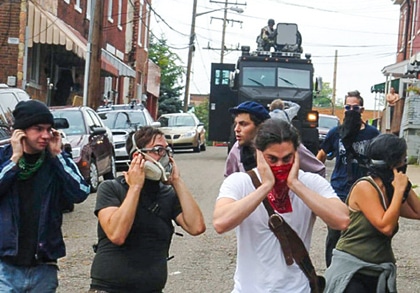 Despite perimeter fences and other site barriers, intrusion into protected areas is not uncommon. When trespassing is detected in a protected area, the main task of security is to intercept the trespasser and to prevent the commission any malicious acts. An effective solution to this challenge is the use of non-lethal weapons, for example, employing long-range, high-power acoustic devices. The Security Robot equipped with a long-range acoustic device for automatically thwarting illegal activities without the need for the presence of a security officer in the area of intrusion.

A long-range, powerful acoustic source creates sound pressure, at a considerable distance, equivalent to the pain threshold pressure for the human ear. A high level of sound pressure is achieved through a directed acoustic beam. The acoustic impact at selected frequencies forces humans to leave the covered area.

Long-range acoustic devices have already proven themselves effective at dispersing demonstrators. This type of tool can not only paralyze trespassers on site, but it can deter them from even approaching the fence line.

The application of long-range acoustic devices works efficiently when a trespasser is in plain sight and there are no obstacles in the path of the sound beam that could weaken or deflect it. As a result, unique defensive capability of non-lethal acoustic weapons to protect large areas is complicated by the necessity of placing a large number of acoustic devices to cover the entire perimeter. Real-world sites, with buildings and extensive perimeters, require a significant number of stationary acoustic security devices for such protection; however, we provide a solution. The dimensions and technical characteristics of long-range acoustic devices make it possible to place them on our S5 series security robots. The S5g security guard robot allows acoustic non-lethal weapons to be moved around for operating in a fully automatic mode.

The ability to promptly move protective acoustic devices around the territory of a protected site provides for an effective confrontation with intruders. The speed at which the mobile robot automatically moves and the range of the acoustic protective device ensure site protection when unauthorized trespassers are detected from distant approaches to the protected perimeter.

If there is an intrusion into the protected area, a security officer has the ability to remotely activate the long-range acoustic device on the robot. The long-range acoustic device is mounted on a pivot mechanism that allows aiming the acoustic beam precisely at the attacker to efficiently oppose the intrusion. A focused beam produces a high-power acoustic signal that emanates up to a considerable distance from the security guard robot.

The capability of physically impacting the intruders at a distance allows your security operation to protect large areas, deter outsiders from approaching the site’s boundaries, and, in case of intrusion, create insurmountable conditions that will curtail any intruder’s activity. Using multiple security guard robots on one site allows your security personnel to respond quickly to emerging threats, eliminating the need to move to the area of intrusion. In specific situations, several robots equipped with non-lethal acoustic weapons can be aimed at a single target, multiplying the impact.

The security guard robot is also effective at sites that are equipped with stationary security systems. This robot allows for the physical confrontation of threats without the direct presence of a security officer at the protected site and can be used for the protection of remote, unmanned areas. The list of possible sites is very large, ranging from power substations to oil fields and uninhabited solar farms located in the desert.

Despite the fact that security guard robots are capable of independently carrying out video surveillance and patrol functions, special-purpose robots have been created to meet additional challenges. The security patrol robot was created for mobile video surveillance of restricted areas; its high-capacity, lightweight batteries allow it to move while consuming less energy. If there is no need to continuously patrol the premises yet occasionally changing observation positions is advantageous, then using this security surveillance robot is optimal. This model is equipped with solar panels that allow it to work autonomously over the course of many days.