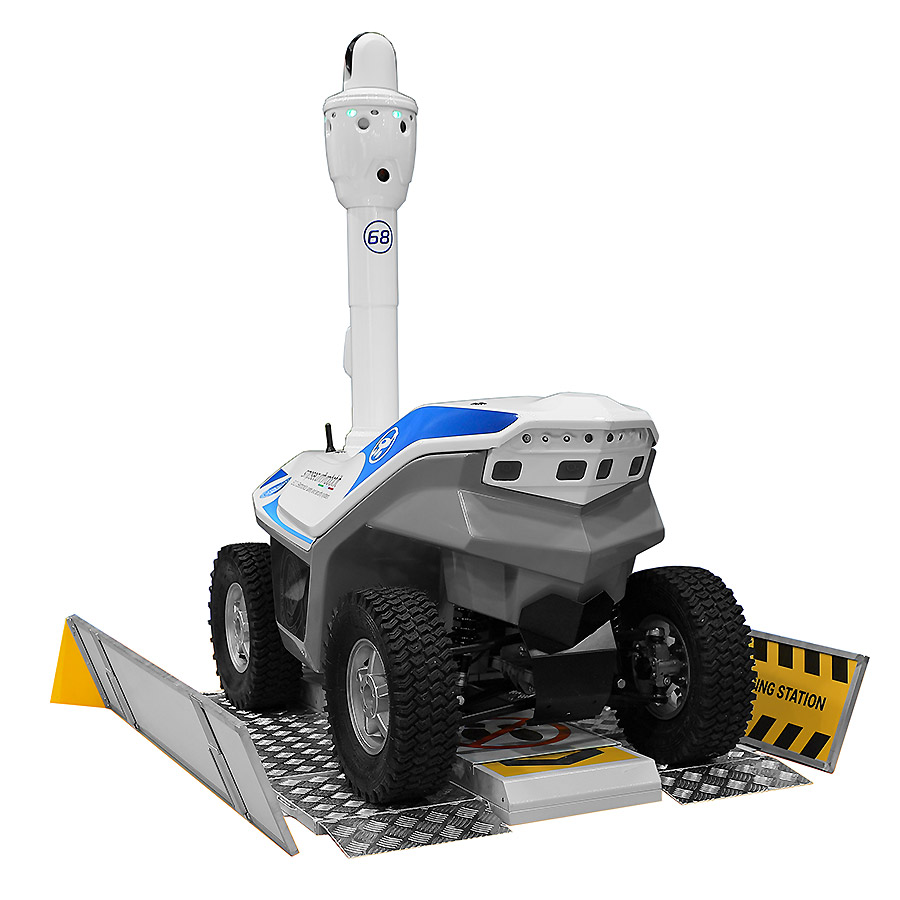 Industrial and commercial organizations can increase their level of security and reap substantial economic benefits by replacing security personnel with S5.2 patrol robots.

Patrol robots are more effective than security guards since they are located on the guarded areas round-the-clock. They are fitted out with an intelligent, 360-degree video surveillance system that can recognize people, and their built-in analytics system can predict when hazardous situations will arise.

The practice has shown that just the appearance of a robot on guarded facilities has a powerful psychological impact on potential intruders, and this not only prevents both ill-intentioned and accidental intruders, but unlawful acts planned out in advance.

Using patrolling robots is much more commercially viable than hiring personnel due to robots’ affordable price and the reasonable cost to maintain them during operations.

Guard for industrial, commercial and utility companies in the age of robotics

Over the course of many years, business owners have used the services of security guards, increasing the company’s overhead and decreasing its competitiveness. The time has come to change that.

Security guards are an obsolete solution for ensuring security. Replacing them with robots is like getting off a wagon and into a Tesla electric car.

Functions of a guard robot patrolling the industrial or commercial facility

A patrol robot is a mobile video surveillance system that moves along patrol routes on its own. The video surveillance system detection people records everything and transmits video images to the security officer dispatcher. The main value added by the robots is that by using them one or two security officers can exercise reliable control over an area that is virtually unlimited in size. Several robots can move about the facility, giving indications of their presence, and if they discover people, they transmit the video images to the dispatcher.

A watchful intelligent video surveillance system is capable of recognizing attempts at encroachment both during the day and at night owing to a robot model that is fitted out with a thermal imaging camera. The availability of several robot models permits choosing a precise solution for a specific objective, and not paying too much for one model that is all-purpose.

Robotizing a security system can be done throughout several phases. By starting out with 2-3 robots and assessing their true effectiveness, it is possible to then gradually increase their quantity and decrease the number of personnel. Despite the fact that a small number of robots become “dissolved” in the premises of a guarded facility that is not even that large, continuous patrolling can considerably mitigate the risks and potential threats.

Different between security robot (Knightscope and others)

Unlike other robots that are designed to move across the smooth floors in shopping malls, the robots manufactured by SMP Robotics are designed to patrol expansive, open areas of land, as well as industrial facilities. That is why their design uses pneumatic tires with a prominent tread that is relatively large in size.

S5.2 series patrol robots have a set of properties that makes them the most comprehensive and economical solution for patrolling the premises of industrial and commercial facilities. They operate in a group patrol mode, whereby the robots coordinate all of their movements among themselves so that there are no unguarded areas. Automatic charging docking stations are used to charge the robots without human involvement. While the batteries are being charged, the robot is capable of continuing its video surveillance. In addition to transmitting video images of an alarm situation via wireless 4G and WiFi networks, patrol robots continuously record data with all their panoramic video surveillance camera in HD format.

As with the purchase of other industrial equipment, when security robots are purchased, they can be written off as a tax deduction, thereby decreasing the tax base.

Specialists from SMP Robotics install the robots on the guarded facilities of a commercial organization. They also provide support during the initial period when the robots are used. All of the work is done as part of a turnkey solution. Installation supervision on the part of the manufacturer ensures that the robots are quickly up and running. A short period of trial operations is necessary to optimize the robots’ patrol routes.

Specialists from a third-party company that provides technical security services can do maintenance work on the patrol robots, as can in-house personnel, for example, people from the production automation department. A company that is involved in technical security and specializes in video surveillance systems and alarm systems can not only handle any maintenance work but can also layout new patrol routes and monitor robot operations.

Operational support for security robots can be divided into two objectives. The first, monitoring how the functions involved in security patrolling are being fulfilled, is done by a security department employee. It makes it convenient if this person is on-site on the guarded area, and can quickly manage the patrol routes and eliminate what causes a robot to stop. For example, if material handling or cleaning work is being performed, it makes sense to disengage that area from the patrol routes. There may occur situations when cargo or vehicles left in the robot’s path create obstacles that are impossible to go around. Changing the robot’s patrol route, or removing obstacles, is something better left to security department personnel that are on the facility’s premises.

The second objective is remote monitoring of the robot’s technical condition, and swiftly remedying any malfunctions. This is worthwhile entrusting to a local company that specializes in technical security, and which is located in an area of easy access. By staying in direct contact with the technical support department at SMP Robotics, a local technical service representative can ensure continuous performance for the security robot. Even personnel at a small technical service company can monitor the continuous operations for a large number of robots thanks to remote monitoring system devices. This allows gaining experience in how to do maintenance work on the security robot’s technical systems, and how to accomplish that technical work quickly and inexpensively.

The patrol robot is ideal for sparsely populated, rarely visited facilities. At remote sites owned by communication network companies that have nothing but a CCTV system at their disposal, it is hard to ensure control over all of the nearby areas. The patrolling security robot is able to examine all of the facilities on its own, without any human participation, and if it discovers an intrusion it can transmit video images to the dispatcher. Thanks to their operational independence, patrol robots are ideal to ensure a reliable level of security on areas that would otherwise be poorly guarded, or unguarded. By ensuring reliable security for these facilities, you can expand their capabilities and increase their level of involvement in the production processes.

The robots manufactured by SMP give the opportunity to make a new step toward robotizing the open-air spaces at a facility.

The robots that autonomously move about a territory of the facility can be fitted out with additional equipment, such as RF code readers for oversized cargo kept at open-air sites to do subsequent inventorization.

To register the number of cars parked by the gates of a guarded area, the mobile robot must be equipped with an external automatic license plate recognition system (ALPR). 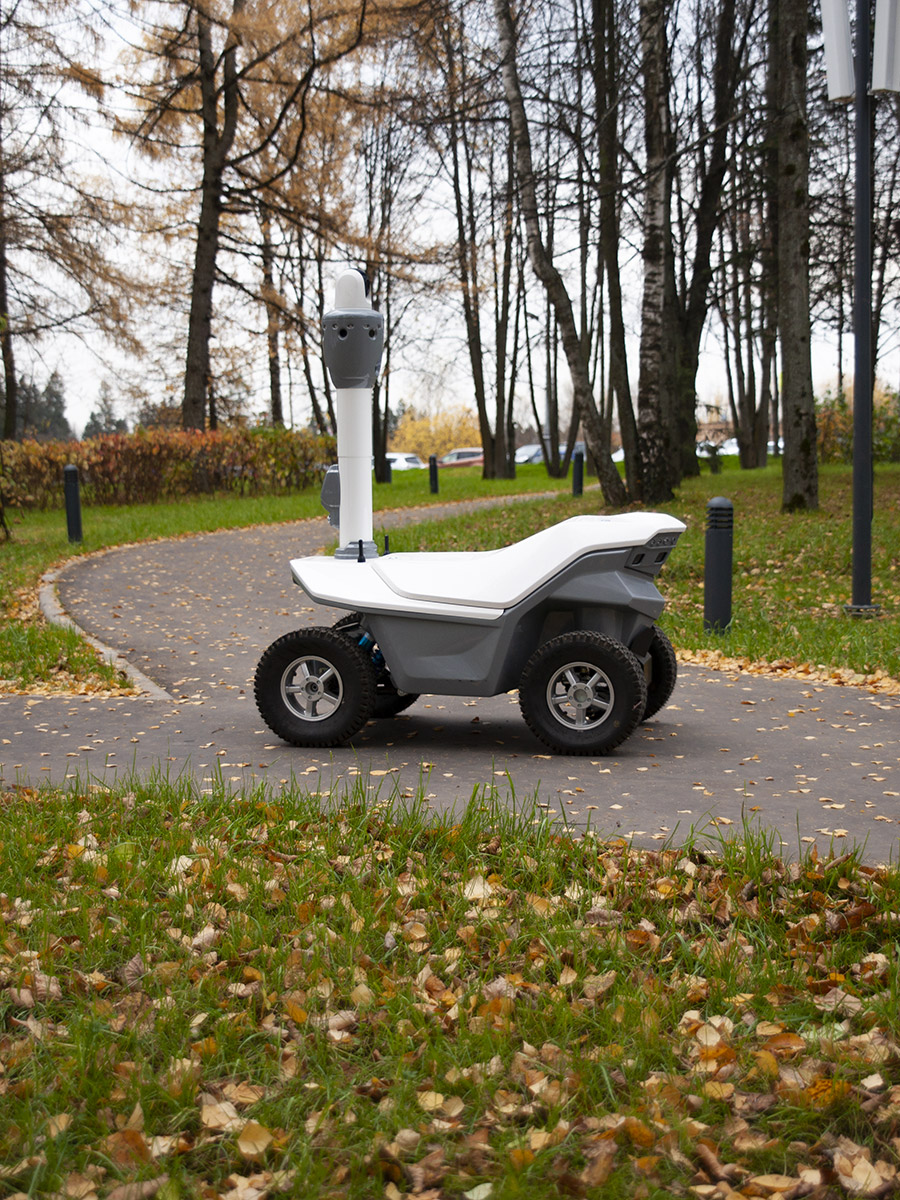 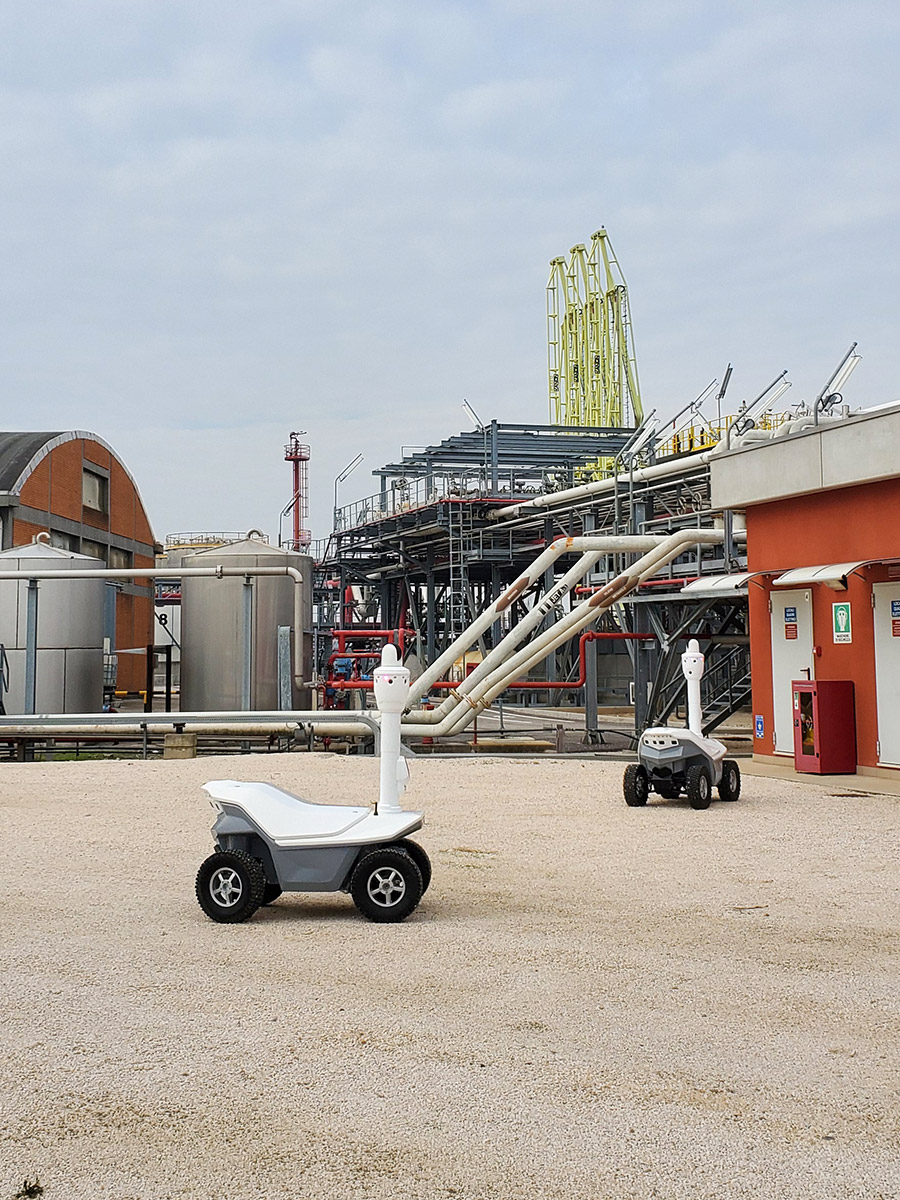 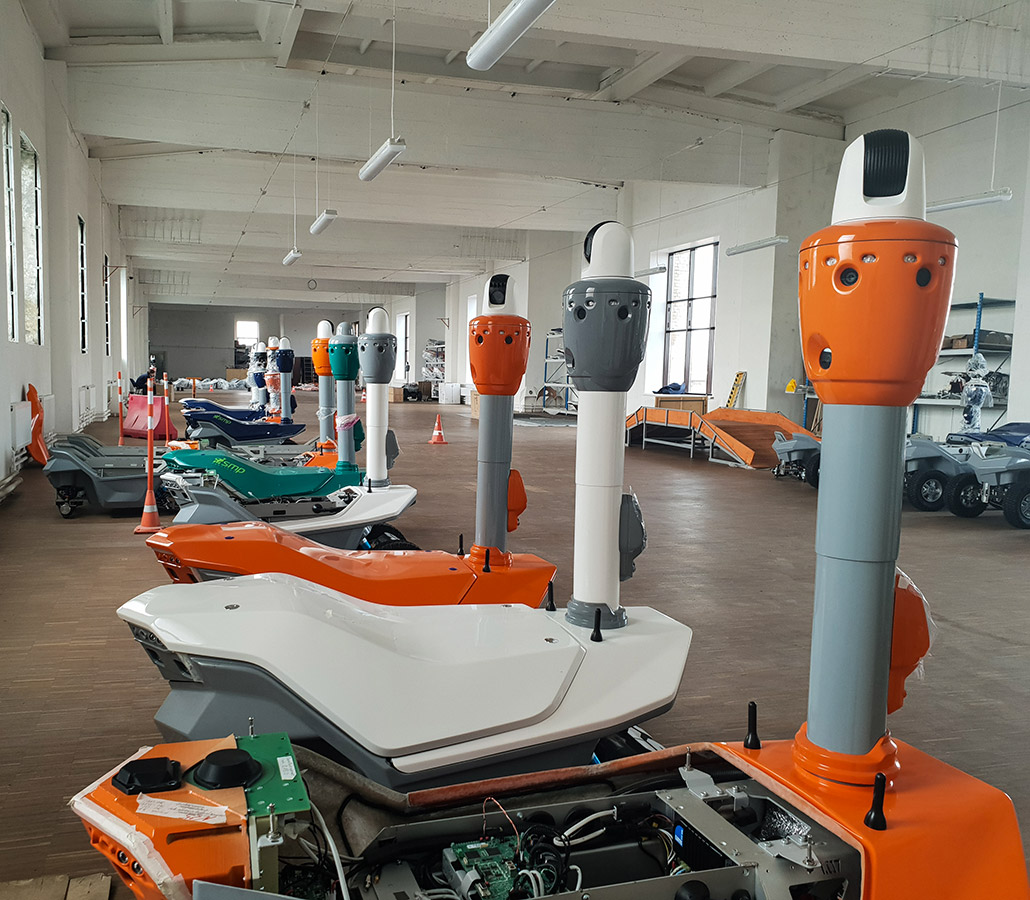 AI patrol robot for a distance of
up to 30 m

AI surveillance robot for a distance of
up to 100 m