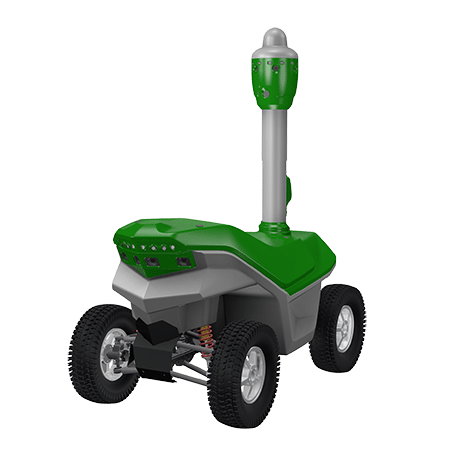 Prompt robot for guarding private houses and patrolling territories. The Prompt Patrol Robot allows performing intelligent video surveillance at medium distances while in motion. The Prompt is designed to patrol continuously, and this permits efficiently keeping control over premises of any size. Using the Patrol Robot is the best solution to guard areas where there are a lot of buildings, fences, or other obstacles that do not allow performing video surveillance from positions located far away. The highest level of effectiveness is achieved by using several robots in one general area that is under guard. Smart patrolling of the premises accomplished by several robots allows using several different cruise routes, making it difficult for an intruder to predict when the robots will appear.

The Prompt is ideally suited to patrol both streets and walkways. An intellectual video surveillance system with AI permits detecting human faces located in the robot’s immediate vicinity in any direction. The fact that the robot and people are located on the same pedestrian passageway shortens the distance between them, and allows taking photographs of their faces that have a sufficiently high resolution to enable subsequent facial recognition.

Using the robot for public safety enables accumulating information for Big Data analysis. Owing to the robot’s movement, the places where information is collected can be swiftly changed depending upon the day of the week, the time of day, or the times for exhibitions or public, athletic, and cultural events. The Prompt Patrol Robot is indispensable for guarding the perimeter of unmanned areas. Thanks to the AI-controlled video surveillance system, the robot is able to detect a person in erratic illumination typical for outdoor surveillance. The Prompt robot is able to reliably detect a person located within a radius of 20-25 meters. For uninhabited areas, or facilities where people are not supposed to be at certain times, discovering a person means an alarm situation that the robot can inform the CMS dispatcher about.

The artificial intelligence patrol robot is capable of independently putting up resistance to an intrusion, or thwarting various threats. To do this, the robot is equipped with a voice notification system with synthesized voice warnings that depend on the type of threat recognized. The unique properties of the artificial intelligence are most apparent when robots are working in a group. By processing Big Data accumulated by the robots while guarding a unique facility, this mode allows predicting the places where the threat of an intruder will most likely arise. Distributed control of the patrol routes using AI control for each of the robots allows forming a highly efficient mobile group of security robots that can prevent external threats.

Human identification to control access for personnel and security officers

A demonstration of robotic law enforcement activity to prevent threats

Patrol Robots continuously moving around the premises using beacon signal lights are able to project their presence across the area under guard. By doing this, they prevent unlawful activity and thwart intrusions into restricted-access areas.

The Prompt Patrol Robot is capable of effectively functioning as a part of a group of robots by using the advantages it has during mobile patrolling. In addition, this robot model provides the ability to rebroadcast data from other robots under complicated radio conditions thanks to MESH WIFI. To increase the autonomous operation time of a robot, it is supplied without computers for video analytics. This model is called S5.2 IP Djet.

Additional robots exist for reliable robotic patrolling over large premises, or around complex facilities. The S5.2 PTZ IS Picard video surveillance robot is ideal to move between open positions that are convenient for long-distance video surveillance. In conditions where the premises are not illuminated, or especially critical applications are involved, the best solution would be to use a security robot equipped with an S5.2 IR Argus thermal imaging camera.

Detecting people within a 30-meter radius

Facial and wearing mask recognition up to 5 meters

Photo and video recording of people and their faces

Demonstration of a presence 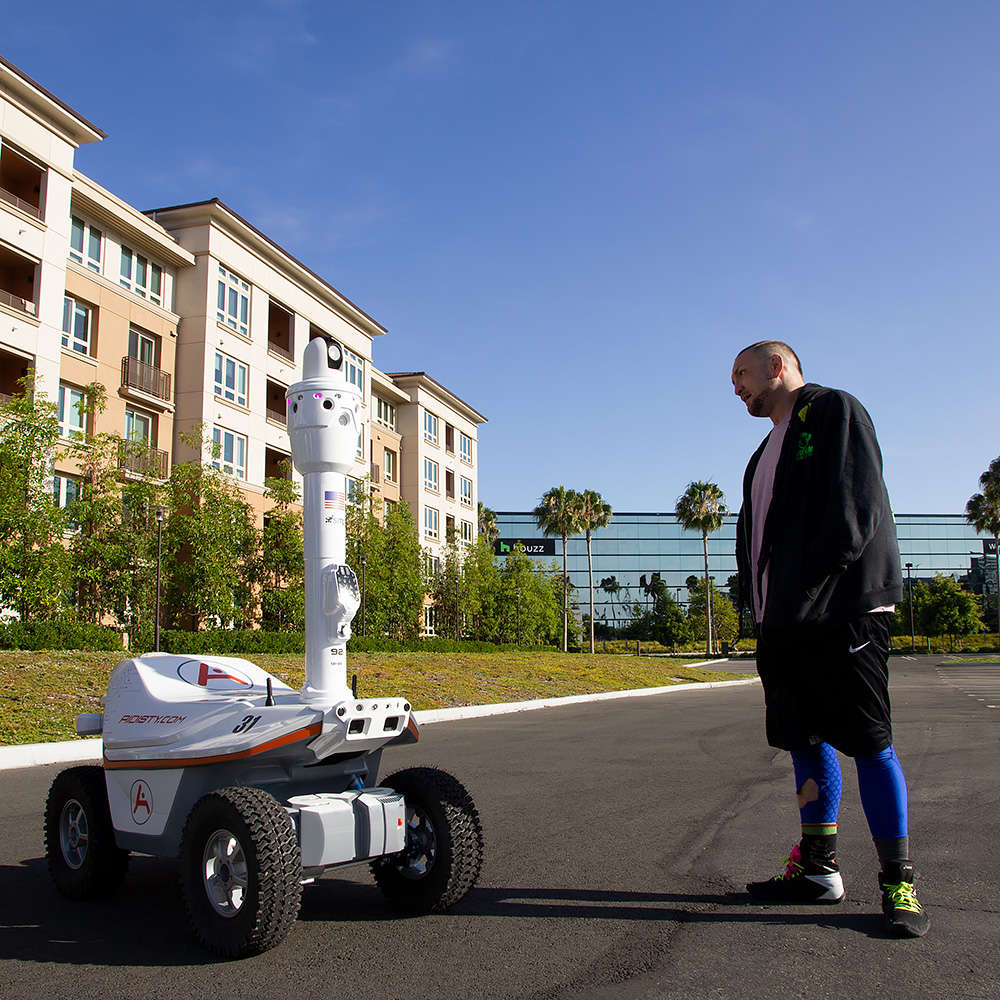 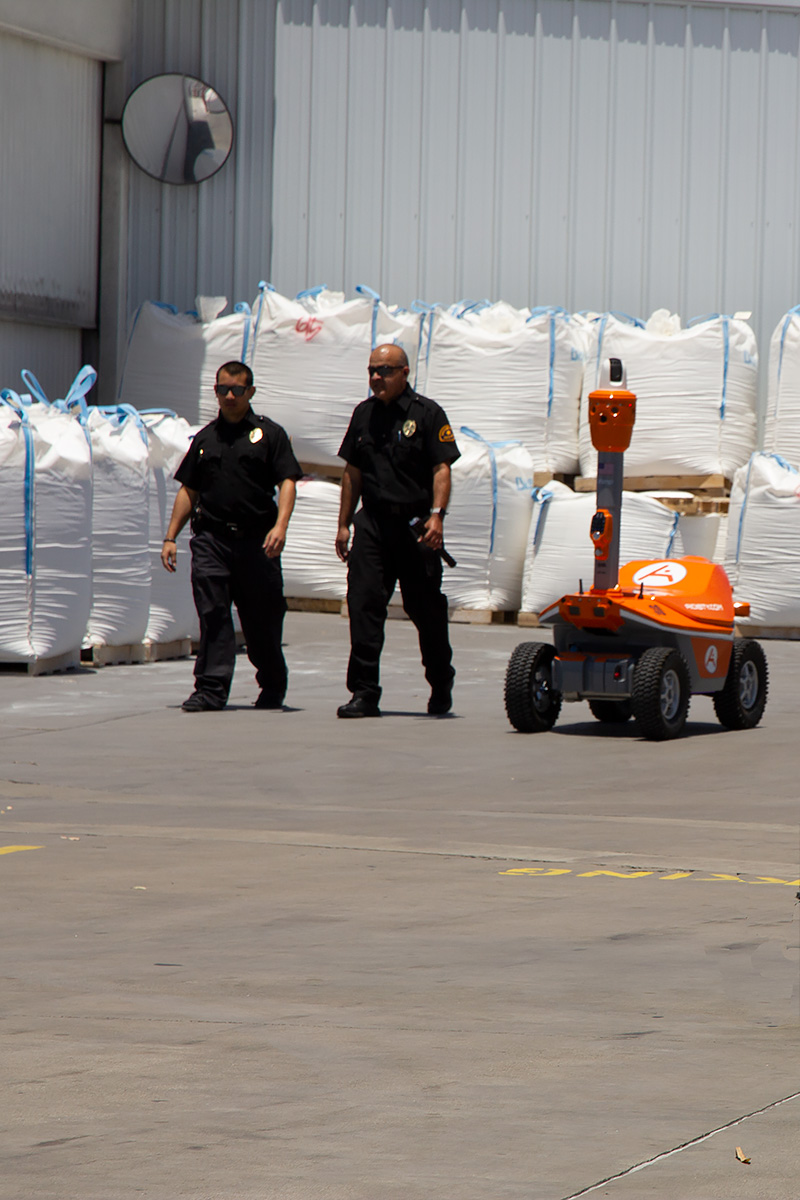 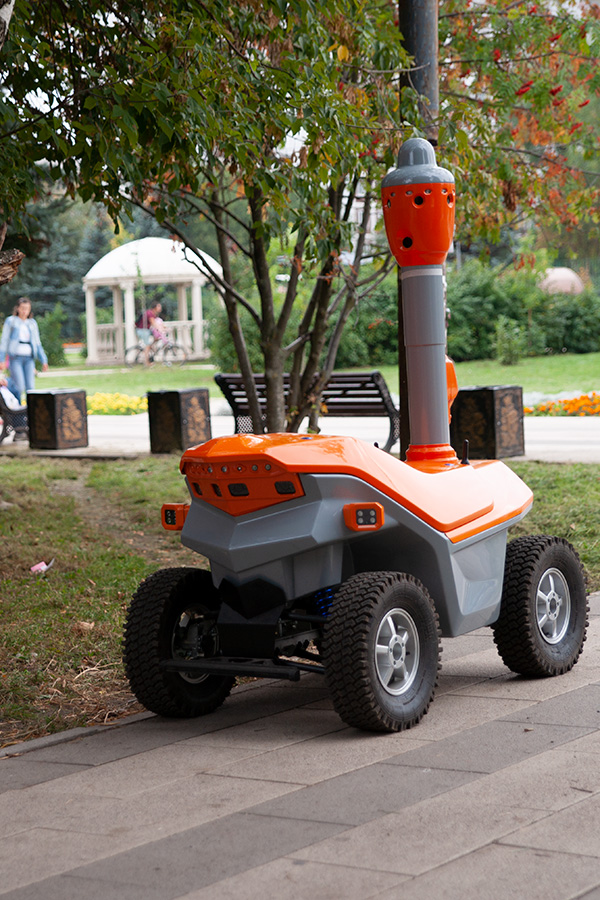 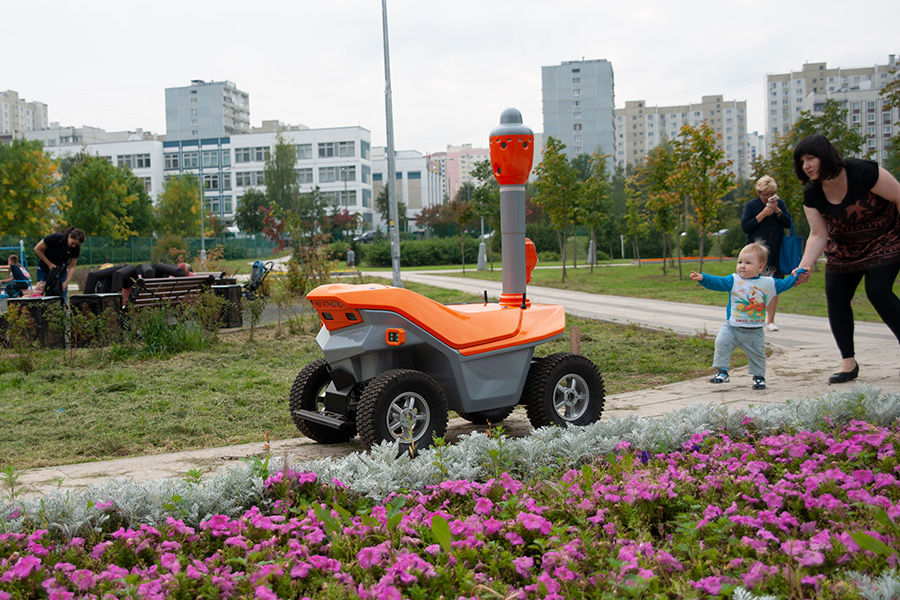 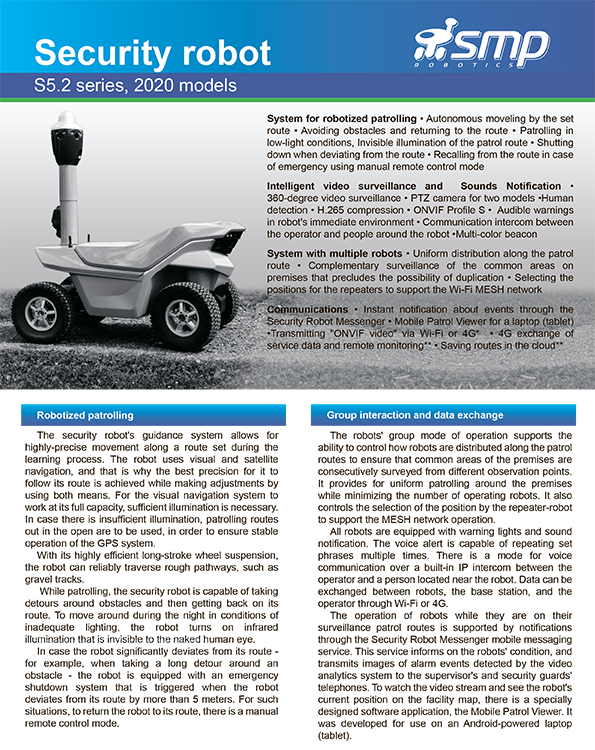